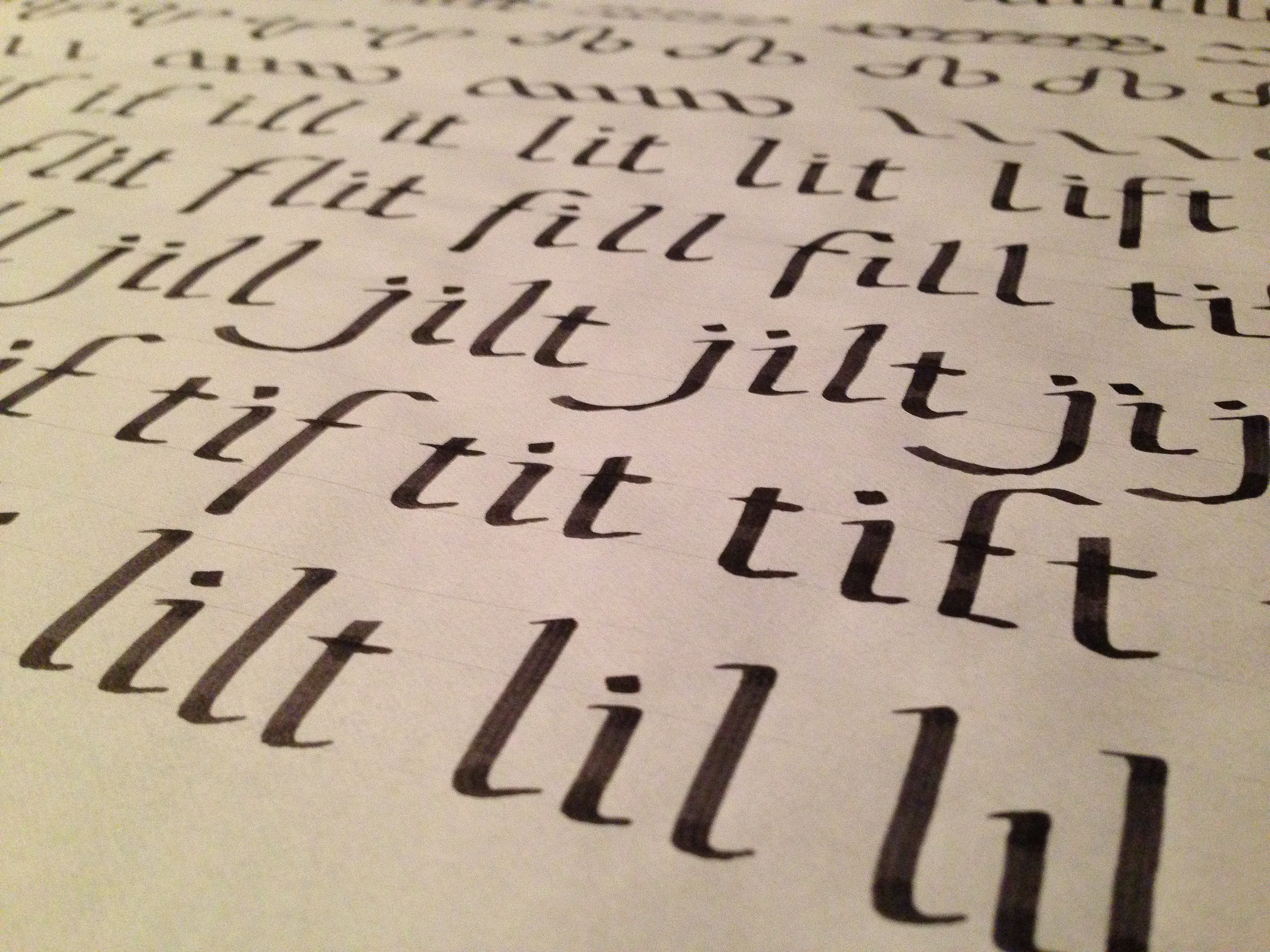 I often visit the Torpedo Factory in Old Town, Alexandria. No torpedoes are manufactured there now, but there is a bustling collection of art studios open for visitors and shoppers. If you are in the area and have never been, I’d suggest taking a trip over a sunny weekend.

Generally, I am content speaking with artists and viewing their work, but everything changed when I saw a beginning calligraphy class offered through the Art League. I really love handlettering and calligraphy is probably one of the most amazing aspects of it. After one class, I’m already hooked. Our first step is learning foundational hand. I particularly enjoy the letter “l”.

Have any of you taken calligraphy classes before? What advice to you have to offer?

Posted by Ryyan on Apr 17, 2014 in Recommendations

As this is my first film recommendation, I must preface this post by explaining a little about my taste when it comes to film. I rate based upon three main criteria: cinematography, story and subject.

Cinematography—I wrap most everything visual into cinematography. There are amazing effects nowadays and directors are really able to express a lot through their presentations without a word being spoken. Some films are absolutely stunning on this level. Avatar comes to mind when I say this. It looked amazing and there were lots of interesting details sprinkled throughout the film, but the story suffered. For some films, cinematography is not quite as important, but it certainly adds to the overall mood of the piece.

Story—I say story because I am considering it in its entirety and not just one piece of it. Some plots are weak, but the writing is insanely clever. Other times, there is an amazing plot, but pitiful dialogue. There are characters that are so well developed, you almost feel as if you have met them. Others are so one-note, you forget their names. I take all of this into consideration after watching a film.

Subject—Given my absolute love of animated film, I am probably the best example of a person who knows when I am not the intended audience. Does that stop me from seeing a film? No. This part of my review process is not based upon the film itself, but more who the film is for. A lot of people criticize films that are not marketed at them, which I find unfair. There are many films that are meant for a different culture, gender, political affiliation or religion.

You’ll find that I will give a ★ if I believe the film has done a very great job of capturing an aspect (if not, there will be a ☆ instead). I also have two additional stars for experience and memory. When it comes to watching a movie in an actual theater, there is an experience behind it. Some movies drag out and that can lower your appreciation of it. Other movies are so forgettable you can’t even remember the main character after an hour or so. That would make a very great movie five stars total. END_OF_DOCUMENT_TOKEN_TO_BE_REPLACED

Shel Perkins: Talent Is Not Enough

Last year, I reengaged with AIGA. Serving as the professional association for design (photography, illustration, and interactive), AIGA provides all sorts of learning and sharing experiences while adding value to the industry. Generally, I attend lectures and salons to connect with other creatives and learn more about design.

One particularly enlightening lecture was given by Shel Perkins to promote his book Talent is Not Enough: Business Secrets for Designers. He highlighted ten very relevant practices for helping your business succeed. END_OF_DOCUMENT_TOKEN_TO_BE_REPLACED

If this is your first experience with Newfoundjoye, welcome! For those of you who used to read my posts on Blogger, it’s great to see you again. Last year, I knew that I wanted to change the current setup of my website to allow for both a blog and portfolio in one spot, but it took a lot of time and consideration to execute. Now that I am making the transition, I ask that you bear with me. Below are a few things to note about how Newfoundjoye will operate moving forward: